A Norman Rockwell painting hangs on the wall of Betty Burks’ Residences at Deer Creek apartment. The painting shows four U.S. marshals walking a little girl to school amidst a scrawled slur and thrown tomatoes.

The little girl is Ruby Bridges, one of the first students to attend a desegregated school in New Orleans after the Brown v. Board verdict. And one of the marshals surrounding her is Betty’s late husband, Charlie.

Two schools in New Orleans were desegregated in 1960, including the one Bridges attended, William Frantz Elementary.

Charlie, a former prisoner of war during WWII, was one of the four marshals assigned to walk her into and out of school each day to protect her from the large crowds that gathered to protest the desegregation.

“They would ride in the marshals’ car and unload, and then they’d park the car and they’d walk into school together. They told Ruby, ‘Don’t watch the crowd; stay between us,’” Betty said.

“And there were all those people down there, and they were throwing tomatoes and calling her , and one had a casket with a black doll in it,” she added.

“That scared her, but she didn’t know why she was scared, because her parents hadn’t told her what it was all about. At that age, she would not have understood.”

Despite the protests, the marshals walked Bridges to school every day for a year. Eventually, white families began to send their children back, but it would be years until schools in the South were fully integrated. 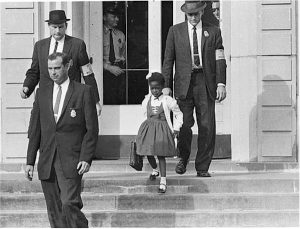 As for the Rockwell painting – titled “The Problem We All Live With” – Betty said her husband saw it in a shop window one day while walking through the French Quarter, years later.

“They’ve got a classroom down in Indianapolis at the Children’s Museum with a replica of the schoolroom – and it’s a classroom where one little coat is hanging on the hanger. That brought tears to my eyes,” she said.

Although Charlie retired as a marshal soon after his job of escorting Bridges, the two maintained a friendship throughout the years until his passing in 2017.

“She came to his wake and stood there with four marshals around her, and she visited everybody who came through that door, especially the children,” Betty said.

“Ruby said, ‘You can’t tell the older people that they have to believe my way. You have to start with the younger people, and teach them how to treat people and be nice to them.’”

At Residences Senior Living, our residents and staff members are full of stories. Read more of them and stay up to date with news on our blog page.